EXTENDED UNTIL MIDNIGHT! Get an extra 10% off* using code SALEJAN10!

Steam showers are very popular nowadays which is no surprise to us. They have many benefits which are often promoted by gyms and spas. But what exactly are they and what is the difference between a steam and a conventional shower? In today's article, we will be answering this question as well as discussing how steam showers function and their many benefits.

How does a steam shower work?

A steam shower is an enclosed area containing a dehumidifying steam generator. Cold water is piped into the generator which is then heated to boiling point. Once the water is heated, steam will be channelled through the shower system and will exit through the stream head. The steam disperses around a person as they use it, which creates a warm, soothing atmosphere.

Steam enclosures are modern and tend to be fitted with digital controls. These controls allow the user to adjust the steams temperature and duration to match their personal preferences. A high-quality steam shower can produce the right amount of steam very quickly and will be sealed so that the steam doesn’t escape. If you are used to having your regular shower every morning, you can still enjoy a steam shower since it doubles as rainfall or standard shower. It means that you can make the steam shower part of your daily routine.

The benefits of steam showers

Steam showers are loved by many because they offer a relaxing, spa-like experience as well as many other benefits. Many of us don’t have the time or money to be making regular trips to a spa. Having a steam shower in your home brings the spa to your doorstep. In addition to this, steam showers have similarities to saunas and steam room but they are much smaller. Instead of devoting an entire room to the fixture, a steam shower takes up the space that a shower enclosure would. Below are even more benefits that steam showers offer.

As you exercise, the metabolic waste builds up in your muscles which is why you probably feel a bit achy after a workout. The steam shower is warm and allows the blood to flow in many parts of the body. This is important since it enables the body to remove the metabolic waste that may build in muscles and cause soreness.

A steam shower can help you relax. It helps you to unwind and to clear your mind. The heat and the warmth of the steam will help increase your blood circulation and make your muscles relax. It also triggers the brain to release the endorphins to the body, which helps you unwind mentally. A steam shower can be a healthy escape from the busy nature of daily life.

Being sleep deprived is a serious matter. But there are many ways to aid inducing sleep, one way is to have a steam shower. Taking a steam shower just before bed can help you get to sleep. It's not the rise in body temperature, but the subsequent cooling down that tricks the body into thinking it is time to sleep.

Anyone who experiences problems with colds or slight breathing problems could be aided by a session in a steam shower. The steam will open up the sinuses and give you the relief you may be looking for. Having a steam shower is not only relaxing but it could help to alleviate respiratory system issues. Having a steam shower before bed can also assist the snorers among us by promoting decongestion. 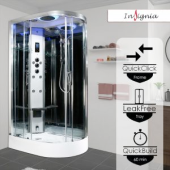 The Insignia Premium is an exceptional leak-free steam shower. It is suitable for bathrooms ranging in size from a modest-sized bathroom to an en-suite. This steam shower is ideal for those who are looking for a more affordable option but still want something that offers a lot of superb features. This steam shower benefits from Insignia’s Bluetooth control and the beautifully iridescent multi-coloured roof lighting creating a radiant glow in your shower cabin displaying the colour of your choice. This steam shower also comes with a premium shower tray that has been specially designed to look and function beautifully.

Steam showers have become very common in many homes as many people love their spa appeal. They require a small investment and will allow you to enjoy their benefits for many years. If you do not have a steam shower, consider looking into getting one so that you can enjoy the full benefits associated with it. At Bathshack, we have a selection of wonderful steam showers that will elevate your showering experience. We stock showers from Insignia, a leading bathroom brand that has revolutionised how steam showers are made. You can rely on this brand to provide the best steam showers on the market today.